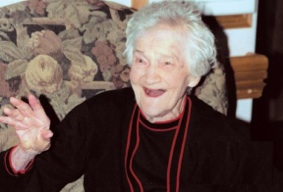 Thelma was born at home in Mill City, Oregon on February 9, 1908. Her father was a brakeman on a logging train in Mill City and died in a train fire trying to make sure everyone else got off.

Thelma lived the majority of her life in Oregon attending Oregon State College where she played the violin in the orchestra. She was also an accomplished pianist and vocalist. She left college to attend business school so she could earn a degree faster and begin earning money to help her family. Upon graduating from the business school Thelma began working at Oregon Journal Publishing Company where her future husband, LeRoy (Roy), was the art director.

Thelma was 21 years old when she married Roy in 1929. He was a Christian Scientist and Thelma’s parents didn’t approve of that religion so wouldn’t attend her wedding. Her son Robert was born the next year and Judy was born in 1933. When her children were small Thelma worked for a number of years as a secretary for the President of Reed College in SE Portland. When the children were older she became secretary to the President of Lewis & Clark College where one of the employee benefits was that Robert and Judy could attend the college tuition free.

Roy passed away in 1974 and Thelma sold their beloved home on the Willamette River in Lake Oswego and moved to a mobile home in Troutdale to be near Judy. All Thelma’s life she was devoted to her family and many people went to her for advice. She was so wise, generous, thoughtful, loving and was never, ever negative. She didn’t complain about anything in her life but was always ready to listen to anyone else complain about their health or their lives in general. Thelma was thankful for what she had and never saw a need to regret what she didn’t have either in personal possessions or in her health. She was only in the hospital one time in her life and preferred to take care of her injuries or illnesses by herself.

Thelma was well known for her wonderful pies and for her beautiful flower gardens. She loved flowers, she loved to eat, to read and to learn but she especially loved music. Anytime she heard music she would start dancing and even when she was confined to a wheelchair she would start moving her feet just as soon as the music started. It was a good day for Thelma when she could watch children sing or dance!

As Thelma’s health needs increased she moved from her own home to several assisted living facilities in the Portland area. In February 2000 she moved to Country Side Living in Woodburn where the employees and especially the owner, Erik Berkey, fell in love with her. When her savings dwindled Erik opened Country Side Living in Canby and applied for a Medicaid contract so that he’d never have to lose Thelma as a resident.

Thelma left an impression on everyone she met. She never let life get her down and she always had a smile on her face and would laugh often. To her, life was good and there was never a need to be sad. Even when the words she spoke no longer made sense to anyone, she loved to visit with people and would answer any question that was asked of her. It wasn’t possible to understand what she said but she looked in your eyes when she spoke and you would be sure that she understood the conversation. Until the end of her life she remained very attuned to the emotions of other people. She could sense when someone was sad or mad or happy and she responded accordingly. She would reach over, take your hand and just look into your eyes and smile if she thought you were sad. She understood and she made you feel better!

After a wonderful 96th birthday celebration at Country Side Living with five generations of her family surrounding her, her health gradually declined and she passed away peacefully on June 14, 2004.